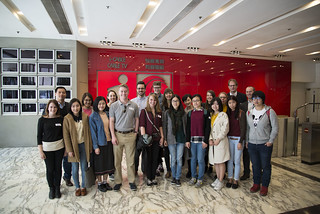 Ohio University has engaged in student academic and cultural exchange with Leipzig University for more than 20 years, and journalism school director, Professor Bob Stewart, is excited about the new collaborative academic exchange and linkage.

“I couldn’t be happier about our progress to date,” he said. “We’ve gotten faculty, graduate and undergrads involved, in Athens, Hong Kong and Leipzig, all in a very short period of time.”

The idea to add a university in Asia to the preexisting Ohio-Leipzig relationship is something that Stewart and Werner Suss, Honorary Professor of Communication Management at Leipzig University, had been toying around with for some time. The timing was good when lecturers from Hong Kong Baptist University (HKBU) were selected as SUSI scholars to participate in the Study of the U.S. Institute on Journalism and Media, administered by Ohio University’s Institute for International Journalism, for two consecutive summers. The idea to engage HKBU with the E.W. Scripps School of Journalism quickly transformed into a reality when SUSI 2014 scholar Bonnie Chiu approached the school to initiate some kind of collaboration.

Most recently, students from Ohio University, Leipzig University and Hong Kong Baptist University met in Hong Kong during the first week of March as part of the recently developed triangle partnership between the three universities. While in Hong Kong, students attended seminars and worked together to develop cross-cultural research project proposals in just four days. They spent most of the time at HKBUs Shaw Campus in Kowloon, and also visited Stanley Market on the south side of Hong Kong Island.

“Hong Kong is an amazing city, and I loved going as a representative of the Scripps school,” said Danielle Keeton-Olsen, a senior journalism major at Ohio University. “My visit strengthened my desire to study communications abroad, as well as to continue my relationship with HKBU and my friends in Hong Kong.”

Over the course of the past couple years, students and faculty members from OHIO and Leipzig University have had the opportunity to visit one another’s schools as part of study abroad programs. But the new triangle relationship with HKBU has introduced new engagement activities such as conferences and research workshops.

“Students and faculty all benefit form having meaningful interactions with colleagues from other parts of the world,” Stewart said. “Our students in Athens gain valuable perspectives and broader world views by engaging with their counterparts in Europe and Asia.”

While in Athens, students from both Leipzig and Hong Kong have participated in homestays with current students. Keeton-Olsen is one such host.

“I did not expect I’d have the chance to reunite with the friends I made while hosting HKBU students this soon,” she said. “It was also really cool to hear about their data visualization and research programs in Hong Kong.”

This mutually beneficial exchange is what makes this level of partnership flourish.

“It’s hard to predict where this leads,” Stewart said. “All I can say is that we never would have guessed back in the mid-1990s that wed still have a vibrant relationship with Leipzig University 20 years later. It continues to thrive because we both benefit from it. As long as everyone in the triangle benefits, the relationship will grow organically, taking a shape we cant even imagine today.”